The Winds of Change

Launched in December 2017 onboard Fleur de Passion, the new scientific programme The Winds of Change developed in partnership with the the University of Geneva, Faculty of Science, entails the real-time monitoring and mapping of greenhouse gases (carbon dioxide and methane) at the surface of the oceans in order to re-evaluating the role of the oceans in the carbon cycle in the general context of climate change.

As Prof. Daniel McGinnis, head of the Aquatic Physics group of Department F.-A. Forel of the University and project manager, explains:

In order to be able to effectively reverse the trend, scientists need to have a comprehensive and accurate view of the concentrations of greenhouse gases on the surface of the oceans and to be able to better understand their role not only as reservoirs of such gases, but also as emitters, of emission source.

But the oceans and fresh water as a whole emit more greenhouse gases than previously estimated, according to the Intergovernmental Panel on Climate Change (IPCC), » Prof McGinnis insists. It is therefore urgent to re-evaluate the role of the oceans in the global carbon cycle for a better understanding of global warming issues.

A pioneering project such as The Winds of Change aboard the Fleur de Passion sailboat is therefore a necessity to collect in real time and continuously along the way, field data that we lack on greenhouse gases. and to allow science to take a step forward in understanding the role of the oceans in the current global warming process.

To perform program, Fleur de Passion is equipped with a ultraportable greenhouse gas analyzer with a sampling port positioned 16 meters above the sea surface on the aft mast and automatically collects methane and carbon dioxide readings every 1 minute. The boat will hence fulfill her mission for the climate until the return of the expedition back to Seville in September 2019. 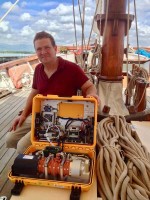